During the process era there are games you know the Sixers have a zero percent chance to win. Games against teams like the Raptors, Clippers, Spurs, Rockets, etc… the Sixers always seem to just get their ass kicked.  The Raptors continued this trend and proved they are just a better and more experienced team. Kyle Lowry and DeMar DeRozan played like the all-stars they are and lead the Raps to a 123-114 win.

This game was not fun to watch. The Sixers continued their experiment of starting Okafor and Embiid together, and I think it’s time everyone learned it won’t work out. They kept it close in the beginning with some good post play from Okafor, but Embiid looked out of sorts the entire time they shared the court. And he made it clear after the game he was not happy stating tonight was the “first time he didn’t trust the process”.

This game reiterated the fact that it is such a waste of time continuing these big man experiments. You don’t play your rookie superstar out of position to make sure a lesser player like Okafor is getting time on the court. Embiid just drifted around on the perimeter and didn’t even have a shot attempt until the second quarter which is absurd. He finished with 9 points (3-6 shooting), 6 rebounds, 5 assists, and two blocks in 27 minutes of action. It’s time to get a trade done Bryan Colangelo, let Embiid flourish as our lone superstar big man.

Some positives to take from the game is the fact that Covington looked very good. He was putting the ball on the hardwood and getting to the basket to get his points rather than staying behind the 3-point line the entire time. The birthday boy put up 26 points on 10-20 shooting and was 3-7 from three. Okafor was the next best man (from a scoring sense) last night as he looked like he was actually trying. He put up 17 points on 6-9 shooting.

The most important thing to take away from this game is Ben Simmons is back and sitting on the bench with no boot on. 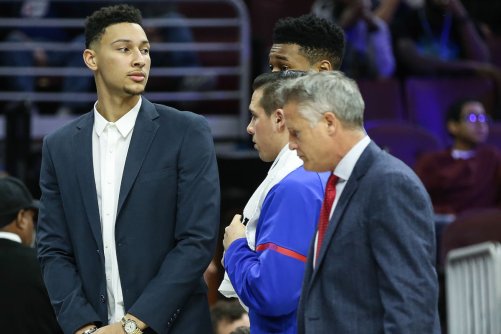 He looked pretty damn good too. I cannot wait for this man to get back on the court.