Breaking: NBA All-Star game will not be East vs. West for 2018, captains will pick teams pic.twitter.com/KhhoftsN8C

Well folks, the East has finally done it. They have become so pathetic that the format of the All Star Game is changing after 66 years. The Western Conference has been stacked compared to the East for years. The West has won 12 of the last 18 All Star games including the past three. Gone are the days of the Eastern Conference just starting the Detroit Pistons and still having the best five players on the court. 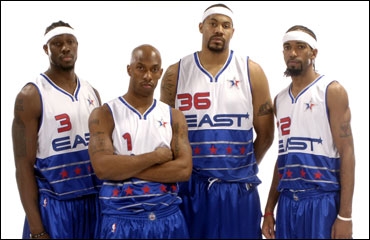 As superteams are starting to form across the league it was inevitable that one conference was going to get stacked. The West was always a better conference top to bottom but things have really gotten out of hand this past offseason. Just to prove it, here is who I would project being the lineups in the 2018 All Star Game if it was by conference:

So basically of the top 10 players in the NBA I have LeBron and Giannis as the only two from the Eastern conference. So, they decided it was about time to make the All Star game picked by captains instead of by conference.

What I’m most excited for is LeBron and Russ being the two captains and nobody picking Kevin Durant. Just gonna be electric stuff. Russ is going to pick Steph, Kyrie, Embiid, and Giannis and they are just gonna dominate everyone. The social media posts from Embiid and that crew together in LA will be blog gold.

Just a lot more of this.