Happy #GameOfThronesEve everybody. Tomorrow our True King makes his run at the throne #SamwellTallGuy pic.twitter.com/jrQqx7LFIF

I am currently coming off the high if Tiger winning the Masters. Me crying in my living room by myself, screaming, and celebrating for my king and my cashed future ticket on the GOAT. I rolled over my UVA future winnings to the Masters and cashed out big on Tiger and I’m gonna take a chunk of that and make some bets on Game of Thrones Season 8.

The first to die. I’m going with Theon at +750. We last saw him departing to get his sister from Euron. Based on the odds the books think that Greyjoy battle will be the first of the season and I’m taking Theon to die. I think Theon will redeem himself and bravely try to save his sister and I think he will succeed in getting her free. The audience kind of hates Theon so the show would be rewarding the audience while still giving Theon some redemption. My only worry is that he kills Euron before his own death but the value is great.

I think Rhaegal is a lock. I think there will be a big-time showdown between Dany riding Drogon and the Night King riding the undead dragon and the other dragon will be deceased.

I love getting plus money with the Yes here. I think we will get an awesome moment of Arya wearing Littlefinger’s face trying to kill Cersei. Whether she succeeds or not is up for debate. But I think this will be a moment like when Arya wore Walder Frey’s face. The audience will be concerned Littlefinger somehow survived and then Arya will make some wild move and we will realize it’s her. I think she’ll use that to get into King’s Landing and have a shot at the queen.

This is my big money prop. I’m going with Gendry at +1000. I think that will be the insane twist of the season (granted there will be many). I think Gendry is the man and his royal blood will lead him to the top after everyone else falls. They will think it’s Dany, then realize Jon’s true bloodline and think it’s him, then I think they will finally confirm it is Gendry.

Prince that was Promised- Gendry +1000 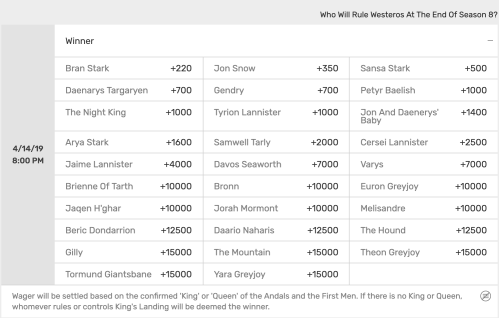 This is the big one obviously. The fact that Dany has dropped to 7/1 is crazy considering she was the favorite for a while but Emo Bran has made himself the new favorite. I have made it very clear that the longshot that I love very much is Samwell Tarly at +2000. Other than Bran, Sam knows the most about how the army of the dead and all of this shit works. He is also the perfect story of a guy who has been made to be a coward, but in the big moments, he always performs. He is also one of the first people we see kill a White Walker in the entire series and he is one of the people who figure out HOW to kill them. That would make it perfect for him to be the one to kill the Night King at the end.

My other value pick is Cersei at +2500. Crazy odds for the baddest bitch in the universe. She has shown time and time again that she will eviscerate everyone in her path including her own family with no regard. Now, this could lead to her downfall, especially if she doesn’t take the army of the dead seriously, but the value is too much for someone like her. It would be very Thrones for the ultimate villain to finish on top.

Let’s enjoy the final season of the greatest TV show of all time and try to make a little money along the way.